In this post, we’ll dive a little deeper into the necessity of CalFresh in addressing food insecurity and CalFresh’s positive impact on the economy. The coronavirus context, entailing massive job loss coupled with increasing food insecurity, has re-elevated the importance of CalFresh as a basic safety net for people who are struggling to obtain food and other basic needs. In addition to supporting low-income and food insecure consumers, CalFresh has been shown to significantly benefit small businesses, including small farmers, as it is directly and rapidly injected into local economies even during a downturn. It’s no wonder that numerous policymakers are calling for an increase in SNAP benefits along with Pandemic-EBT (whose slow start has led to only only about 15 percent of eligible children receiving benefits as of May 15) during the coronavirus pandemic— and even after it’s over.

Despite the overwhelming evidence of the positive effects of SNAP (the national name for CalFresh), the current federal administration has repeatedly threatened to cut SNAP for over 700,000 Americans, which would be detrimental to all layers of the food system. As CalFresh Awareness Month comes to a close, it’s important to reiterate the numerous positive impacts of CalFresh on local communities and its ability to provide a lifeline during the pandemic and beyond.

Comprehensive and widely cited data from the Brookings Institute demonstrates that food insecurity has skyrocketed during the coronavirus pandemic. Furthermore, the study found that “Food insecurity in households with children under 18 has increased by about 130 percent from 2018 to today.” 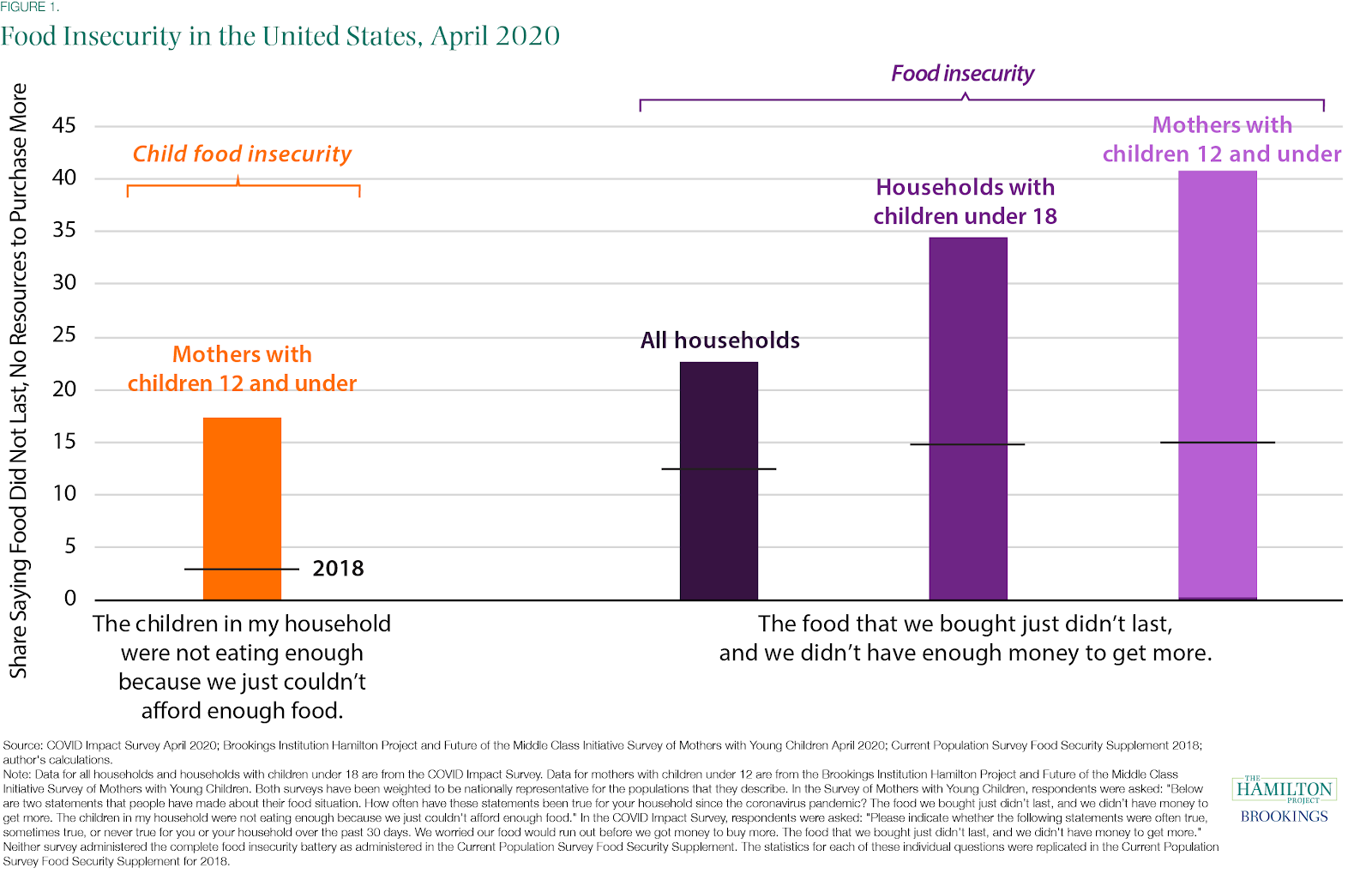 Food insecurity has always been a pressing national issue— and a major facet of Bounty’s work— but the covid-19 pandemic has exposed just how crucial and dire the need to address food insecurity has become. The alarming statistics in the graph (above) will only continue to increase if structural support systems are not implemented and programs like SNAP are not bolstered and championed. According to a comprehensive review by the American Public Health Association, “SNAP participation reduces food insecurity by up to 30%, even more for some populations.” Along with significantly helping people combat chronic food insecurity, SNAP also boosts local spending and helps fight poverty in rural communities. 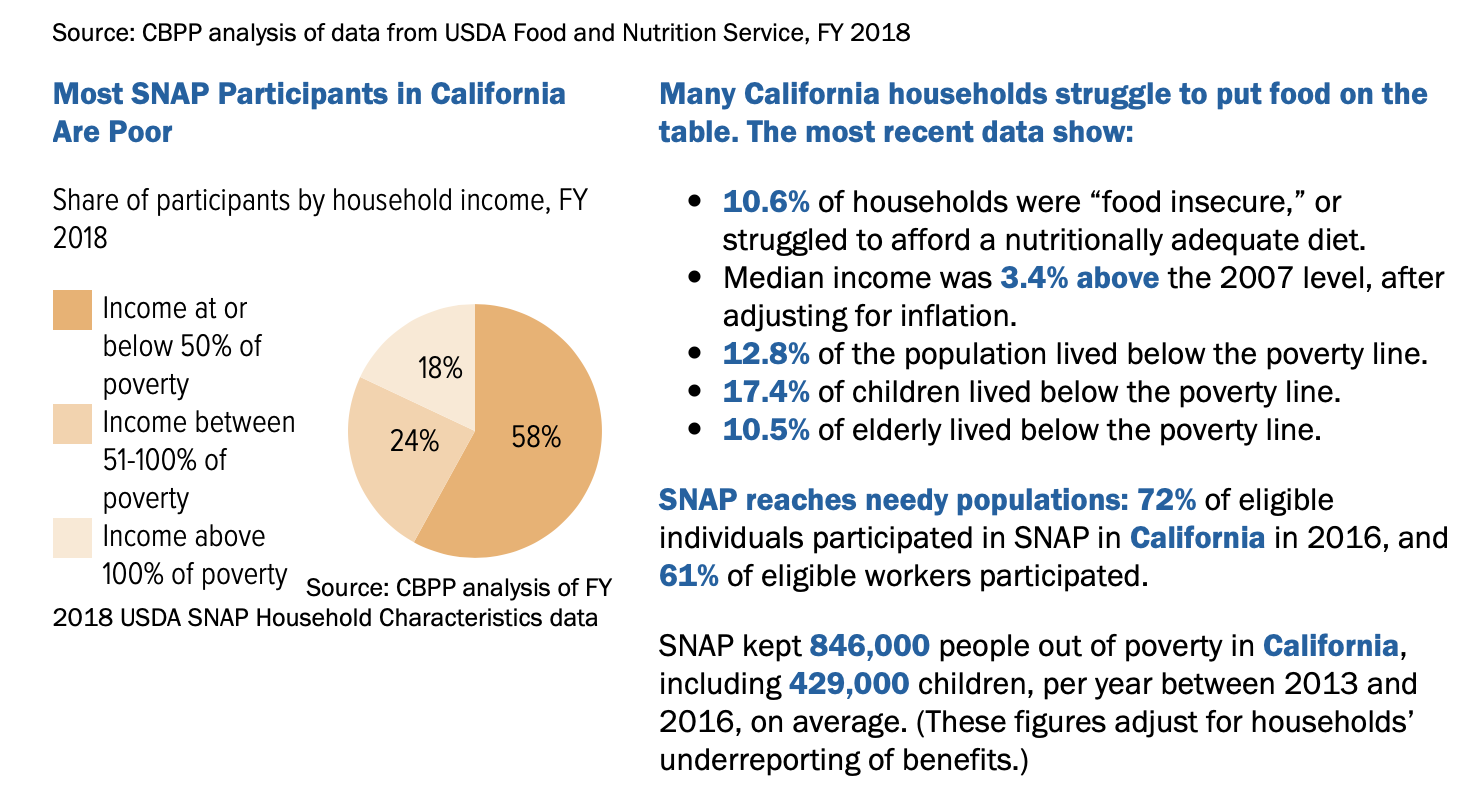 The USDA published a 2018 study that concluded the following: “It appears that as a program targeted directly to low-income consumers with a high propensity to quickly spend additional benefits, SNAP has among the largest employment multiplier impacts of any Federal program thus far studied.” This is because SNAP has been proven to increase economic activity, especially in rural communities where poverty tends to be more persistent than urban areas. The logic here is relatively simple: if people have sufficient funds to pay for basic necessities like food, they’ll spend that money quickly and locally, and in turn, may have extra cash to spend on other items, which increases purchasing power and generates revenue for small businesses and their employees who also gain from increased revenue. This economic principle is known as the “multiplier effect.”

Small farmers have also benefited in many ways from the CalFresh multiplier effect through the Market Match program described in a previous post. According to the Farmers’ Market Coalition, “…the rapid growth of SNAP usage at farmers markets in recent years demonstrates that even a small increase in the percent of SNAP benefits spent at farmers markets can make a real impact—more fresh, nutritious foods going to families who need it, and millions of dollars in revenue going directly to farmers.” Locally, during April 2020, $5,675 of CalFresh was redeemed at our seven currently open FM LIFE markets through a total of 291 unique transactions that included 17 new CalFresh customers. Even amidst the coronavirus pandemic, that is a 26.62% CalFresh redemption increase from April 2019 which directly translate to increased profits for small farmers. In addition, many small farmers’ are actually reliant on SNAP to feed themselves and their own families, indicating that this program is even a lifeline for those that feed their communities.

Furthermore, the USDA found “that SNAP redemptions have a positive and statistically significant impact on local, county-level employment,” which means SNAP usage directly correlates to increased place-based employment. The idea that SNAP and other government assistance programs are too expensive or incite people to voluntarily choose to be unemployed is a false characterization that directly targets and undermines the efforts of many low-income people, particularly low-income people of color who are disproportionately affected by the pandemic, and also is a direct contradiction to all state and national data about the economic- and employment-related benefits of CalFresh/SNAP. 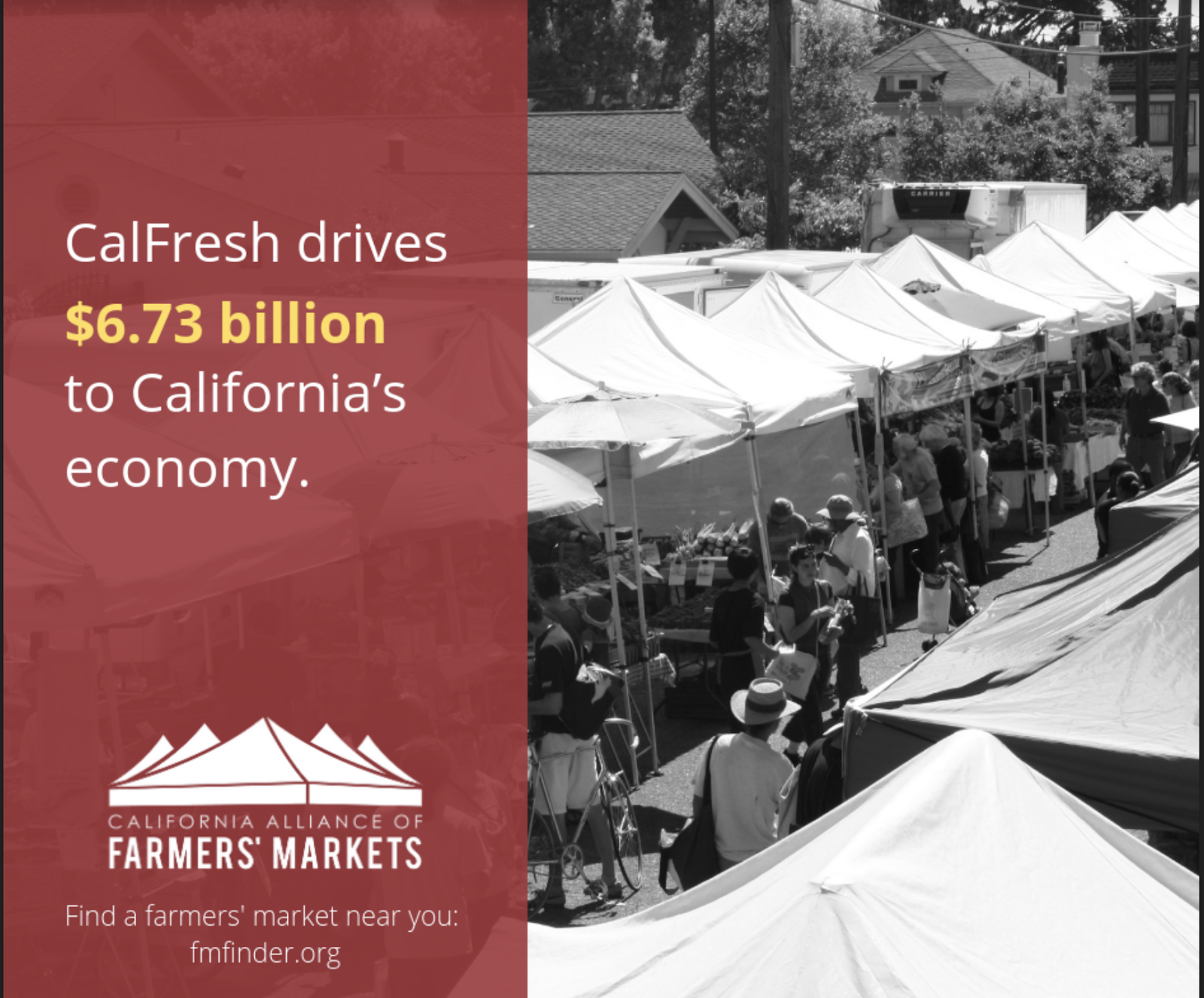 In sum, not only does CalFresh increase the food purchasing power for over 4.3 million Californians, it also drives $6.73 billion into California’s economy, which as we’ve seen, significantly increases food security and boosts rural economies at the local level during economic downturns, meaning it’s especially important here in Sonoma County. We hope you’ll join Bounty by sharing this information and working toward our mission of “healthy food for all.”

This site uses Akismet to reduce spam. Learn how your comment data is processed.

Faces of the Market